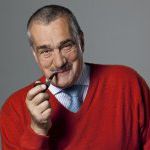 The Institute for Politics and Society is organizing a public debate on the topic "European values".

Europe is experiencing dramatic period of many crises and challenges from migration to security after the crisis, debt and energy. In order to confront this, Europe must make it clear what it wants, where it is going and what the result with be.

There is much talk about European values and ethical foundations. But what really are these values and foundations? Responses to the refugee crisis refer to the basic European value of helping people in need, yet not to European principle of solidarity. There is also the concern for safety, protection of cultural heritage, and in the broader sense, of European identity. What should be the balance of these values?

Petr Kolář, a former ambassador to Russia, US Initiative for European values

The debate will be held on March 22, 2016 from 18:00 at CERGE-EI, Politických vězňů 7. The debate will moderated by the chairman of the board of the Institute for Politics and Society, Mr Jan Machacek. The event will be held in Czech and the admission is free.