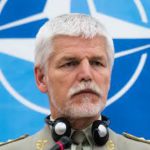 Institute for Politics and Society in cooperation with Jagello 2000 organize business breakfast on How to strenghten the bond between the US and Europe - The results of NATO summit in Brussels.

NATO is an international organization of 29 states. The Czech Republic is a member since 1999 when, together with Poland and Hungary, became one of the first countries of the former Eastern bloc which joined NATO. Former Chairman of the NATO Military Committee between 2015 and 2018 was Army General Petr Pavel.

We will be discussing with Army General Petr Pavel about new challenges for NATO countries, such as transatlantic cooperation issues, defense spending and acquisitions in the army. The debate will also deal with topics such as the ability to face hybrid threats and the importance of collective defense and foreign missions.

The main speaker of our business breakfast will be Petr Pavel, the former Chairman of the NATO Military Committee.

This event will be moderated by Jan Macháček, Chairman of the Board, Institute for Politics and Society.

The working language  is Czech.